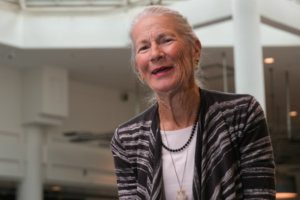 Jaden Bishop, a fifth-grader at Holy Angels Catholic School in Baltimore, led the Prayer of St. Francis at the back-to-school breakfast for the Partners in Excellence (PIE) scholarship program.

John Paige and Kai Young, middle-schoolers at the Cardinal Shehan School in Baltimore, lifted their voices and the spirit of several hundred adults with their rendition of “Rise Up.”

Jacob Stahl, a PIE Scholar, took to a podium and shared that he shed his stage fright by being active in five choirs at Archbishop Curley High School in Baltimore.

Betty Contino’s mother, who inspired her decades ago to “Don’t just stand there, do something,” would have approved.

Contino was recognized at the Sept. 6 event at the Renaissance Harborplace hotel with the Partners in Excellence Award for her leadership of the Women’s Education Alliance (WEA).

The mission of WEA is to support Cardinal Shehan, Holy Angels and the two other Catholic community schools in Baltimore City, Archbishop Borders and Ss. James and John. That dovetails nicely with PIE, which since 1996 has awarded more than $30 million in scholarships to children from low-income families.

Contino, a parishioner of the Catholic Community of St. Francis Xavier in Hunt Valley, was recruited by Jennifer Hammand, director of grants for the Archdiocese of Baltimore, to broaden the Women’s Alliance outreach begun by Mary Catherine Bunting, a Catholic philanthropist.

In 2012, Contino led a group of 20 women in the formation of WEA, which in addition to creating scholarships, provides support that has included classroom technology, summer reading initiatives, state-of-the-art playgrounds and school supplies.

That last initiative involved Contino and her husband of 24 years, Fran, hosting a Happy Hour in which guests were asked to bring a new backpack, filled with classroom supplies.

“We had 90 people show up,” Contino said. “We’ll have 300 at our annual fall luncheon (Nov. 7). We’ve got women sponsoring children (their tuition), serving as teacher’s helpers and math tutors. The people doing organizational work for us, do it for free.”

It’s hard to say no to Contino, 72, who is chairwoman of WEA’s executive, membership and fundraising committees.

The oldest of six siblings in what she called a “meager household” in Perry Hall, Contino received a wealth of inspiration from her late mother, Mary, and attended St. Joseph School in Fullerton.

She rose from administrative assistant to vice president of Fair Lanes Inc. In the late 1980s, singlehandedly, she founded First Fruits, which provided clothing to the homeless. It evolved into the Christopher Place Employment Academy, a signature program of Catholic Charities of Baltimore.

At the PIE Back-to-School breakfast, which was sponsored by Gaudreau Inc., Contino shared with the business community her interest in providing educational opportunities.

“God got my attention,” she said. “He said, ‘Maybe if you work with children, they won’t become homeless.’ … Our schools provide a concrete path to a better future. These children want that. I have yet to find a better way to help the world than putting them where God wants them.”

“The gift of a Catholic education makes a tremendous difference in the lives of our young people,” he said. “All young people face a lot of challenges, challenges you and I could not have imagined when we were growing up.

“We should never underestimate the transformative impact of a Catholic education on the lives of these young people.”