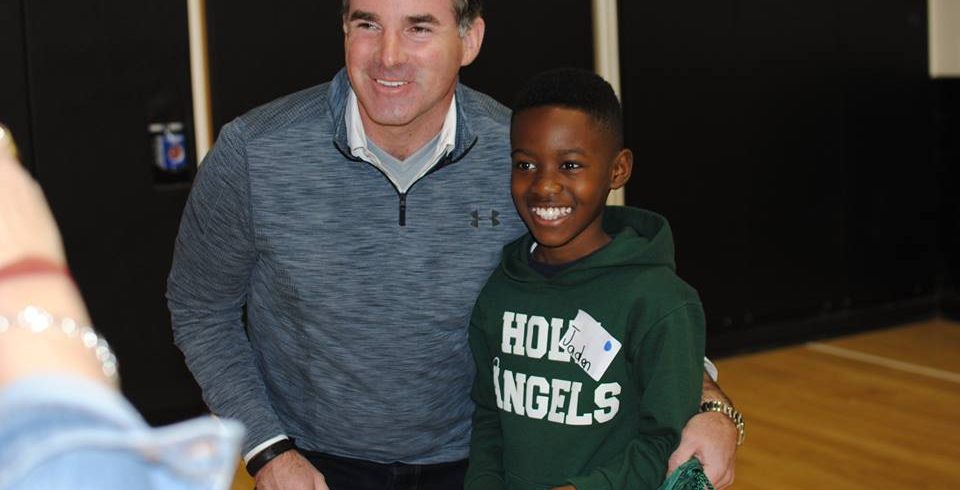 From left, Pharrell Wilson of Archbishop Borders School and Payton Hopkins and Aaron Samuels of Cardinal Shehan School play bongos in the music room at Under Armour House at Fayette May 9. Also pictured are Eder Najera-Lopez, back to camera, and Ky’liyah Newsome, far right, both of Archbishop Borders. All were among 83 Plank Scholars from four Catholic community schools who met Under Armour founder Kevin Plank and Archbishop William E. Lori. (Courtesy Archdiocese of Baltimore)
Archbishop William E. Lori asked the children who they thought he believed in. After they answered “God” and “Jesus” he added, “Someone else I believe in – you.”
He blessed them before they divided up for a morning of music, art, dance, basketball, volleyball and entrepreneurship.
It was quiet in the music room, as children wearing headphones put together musical compositions on Mac computers. The whole group listened to a driving beat composed by Riley Rivera, a fourth-grader at Archbishop Borders. “I was messing around,” he said, a smile on his face.
In the art room, Dillan Smith, a Ss. James and John third-grader, drew a picture of the White House. “This is my house,” said his caption. “I am the president.”
He noted one special addition: “I put the Under Armour sign on it.”
Plank’s pledge funds scholarships at four community schools which serve children from low-income families, according to Matthew Anthony, director of PIE, which has awarded more than 25,000 scholarships, worth more than $29 million, to children from low-income families in the past 20 years.
“He’s known for saying he invest in what works,” Anthony said of Plank.
Camille Brown, associate superintendent of Catholic schools, looked on with delight as children swayed to the music in the Dance Room.
“I’m having a good time watching them and listening to them and seeing the possibilities,” she said. “Kevin Plank took time out of his day to come and greet the children. Archbishop Lori took time out of his day to come and greet the children. It made the children understand they are important.”
“We plan on really making a connection between the center here and Ss. James and John,” said LaUanah King-Cassell, the school’s principal. “This is just a blessing for us.”
As she watched children giggle and play on the Turf Field, Lisa Taylor, Cardinal Shehan’s art teacher and librarian, said “They’ll never forget this experience. It’s awesome.”