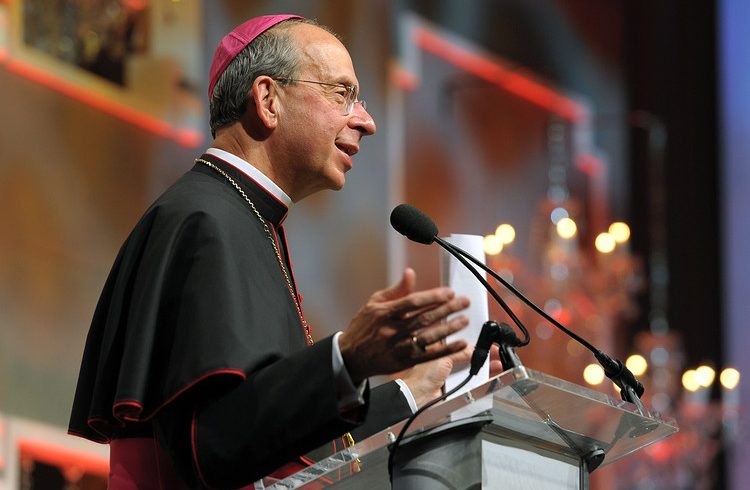 The more than $800,000 expected to be raised by the Archdiocese of Baltimore’s annual gala for education will support 160 scholarships and contribute to an endowment fund for future educational needs.
Tyler Tate, gala chairman and president of Lewis Contractors, thanked the more than 800 people gathered for the eighth annual event Sept. 24 at the Baltimore Marriott Waterfront for helping families that might not otherwise be able to send their children to Catholic schools.
Tate was among the speakers at the gala who pointed out the success of the archdiocese’s Catholic schools: 99 percent graduation rate from high school, with 98 percent heading on to college; and SAT scores 150 points above the Maryland average, among other statistics.
He noted that while it is important to raise “smart kids who think critically,” it is more important to help parents raise good kids.
“Good kids grow up to be good men and women and good Baltimoreans and good Americans. And we need that right now,” Tate said. “Supporting Catholic schools, providing for these scholarships is more than just giving kids a chance – and a good chance at that. By supporting Catholic schools, you are helping build good kids into good men and women.”
The gala especially supports the archdiocese’s Partners in Excellence program, started 20 years ago by Cardinal William H. Keeler, archbishop of Baltimore, and Raymond “Chip” Mason. Over the years, PIE has provided more than $28 million in partial, need-based scholarships for elementary and high school students in Baltimore City.
One of the students assisted by PIE regaled the crowd with his tales of studying at a Catholic school in Baltimore. Jeremy Freeman, who now teaches first grade in Baltimore via the Teach for America program, thanked his mother, Geneva Freeman, for making the sacrifice to send him to Father Charles Hall School.
“Without her guidance,” he said, “I would not be standing here tonight. While she herself did not attend a Catholic school … she knew that a Catholic school would lay a strong solid foundation for me both inside and outside the classroom, and I credit this foundation for much of the success I have experienced since that graduation day in 2004.”

Freeman said his teachers pushed him to be the best he could be, in a way that affirmed what he was learning at home. “They showed me the power of hard work and helped me to understand that nothing is accomplished alone.”

Freeman graduated from Cornell University in 2105 with a bachelor’s degree in applied economics and management. He accepted a position with Teach for America, which provides teachers for low-income schools. Each corps member, as the teachers are called, makes a two-year commitment. Freeman is teaching at William Pinderhughes Elementary/Middle School in West Baltimore.

An alumnus of the Father Charles Hall School in Baltimore, and a recipient of the Partners in Excellence Scholarship from the Archdiocese of Baltimore, Cornell University graduate, Jeremy Freeman, teaches first-grade at William Pinderhughes Elementary School in Baltimore City through the Teach for America program. (Kevin J. Parks | CR Staff)

Another Catholic school alumnus addressed the gala crowd. Kelly Wright, a weekend anchor for Fox News Channel and nationally known recording artist, mixed his message with song, paraphrasing Marvin Gaye’s “Mercy Mercy Me” with lyrics about students and Partners in Excellence.
Wright noted that the song, which first came out in 1971, was popular when he was a student at St. Maria Goretti High School in Hagerstown, “and it still has the same message today. We still have issues and trouble in our land because somewhere along the line, we have forgotten to show mercy. Somewhere along the line we have shown hostility instead of humility.”
“I understand that the ruin of a nation begins in the homes of its people,” he continued. “And the opposite is true as well: the greatness of a nation begins in the homes of its people. So if home is where the heart is, where’s your heart? As you affect the lives of the children in your home, they will spread that to their school, to their church, wherever they might go.”
He said Catholic education was “poured into him” by his mother, June Lorraine Overton Wright, who at the age of 16 was sexually assaulted. He said he does not consider himself a “product of rape. I’m a product of love and courage.”
“Don’t get it twisted, because you totally miss the importance and the relevance and the significance of what God did there.”
He had been attending public school in Washington, D.C., which was not working for him. His mother made the choice to send him to a Catholic school where changes began to take place in his life. He said his mother determined that her son would not be raised to be mediocre, and just accept “getting by,” but rather, “My son must produce excellence.”
His mother eventually sent Wright to live with his grandmother in Hagerstown where he could attend St. Maria Goretti. He said he still has great friendships from his time at the school.
“It goes to the heart of people partnering for excellence and June (his mother) not willing to accept that her son would become a statistic in the worst way. Instead she planted seeds of excellence in me; the school reinforced it,” he said. He learned at home a sense of purpose and value that God had created him for something good.
Closing the banquet, Archbishop William E. Lori of Baltimore thanked the attendees for helping young people use their God-given talents to become the people God has called them to be.
He acknowledged the success of the students in Catholic schools and noted that the support of Catholic students is essential. “My faith, our faith, compels us to do this,” so that the dignity and worth of each child is affirmed and they can see the beauty of God’s creation through the eyes of faith.
The entertainment included the pep band from The John Carroll School in Bel Air, the choir from Archbishop Spalding High School in Severn and a dance troupe from Mercy High School in Baltimore.
By Christopher Gunty

This post was adapted from The Catholic Review. See the original article here.